Half an hour before six Banyan trees in Western District on Hong Kong Island were chopped down in August, Central and Western district councillor Wong Kin-shing received an email. Although he was fully aware of the opposition from the local community, there was nothing he could do to stop the trees from being removed.

"This is notifying, not consulting," Mr Wong said. "The government does not respect our district council."

Although they are directly elected by Hong Kong residents, district councillors have little say in government policies concerning local communities. The lack of power results in a low turnout rate in the council elections.

Mr Wong said the Highways Department, which was in charge of the removal of the trees, held two meetings with the district council.

Councillors proposed several solutions such as trimming the leaves, but none of them was taken in the end.

"We are sad to see the District Council in this state," said Mr Wong, who will not run in the upcoming elections.

To enhance communication between the government and residents of Hong Kong, the former colonial government established the District Boards in 1982. In 2000, the Boards were renamed District Council.

The Home Affairs Department says on its website that District Council function as advisory bodies, giving suggestions to the government on matters affecting "the well-being of the people in the district." They also give advice on government programmes and the use of public funds as well as public facilities.

If funds are allocated, the District Council should use them to improve the environment, spend on community activities or promote recreational and cultural activities within the district, the website says.

But some councillors doubt if their suggestions are taken seriously by the government.

"When it comes to government policies, the District Council is powerless as an advisory body," says Kelvin Sin Cheuk-nam, a Democratic Party candidate who is running for the Central and Western district in the upcoming elections.

He says when the Planning Department asked for their council's advice on the construction of 3,000 flats. But when most residents in the area voiced concerns over the lack of transportation arrangements through two consultation sessions organised by the District Council, the department refused to disclose further information regarding the project.

Mr Sin said when he asked the officials whether the plan would be scrapped or if the transport issues would be dealt with, the Planning Department offered no details.

Seeing no formal power in the District Council, many HongKongers will not bother to vote in the election held in November. The turnout rate of last election was 41.49 per cent.

Julian Lam Sai-fung, 20, who lives in the Kadoorie area of Kowloon City, said he would not vote because district councillors have no impact in his neighbourhood, although it is the first district council election he is eligible to participate in.

"Over the past few years, our district councillors have not brought any changes to our community," said Mr Lam. "Maybe there is nothing for [the councillors] to improve, which is why my vote does not matter."

Emily Lau Wai-hing, chairwoman of the Democratic Party, agrees that the "advisory role" of District Council explains the low turnout.

Speaking to a group of journalism students from Hong Kong Baptist University, Ms Lau says the lack of power also puts off aspiring politicians from running in the elections.

In this year's District Council poll, 66 seats have only one candidate running, while in 2011, 76 out of 412 seats were uncontested.

"Some people would say the District Council election is not meaningful, because councillors don't have power," Ms Lau says, "It is true."

But Mr Sin believes District Councillor can still serve their communities even though they have limited power. That's why he is continuing his election campaign.

He said instead of lobbying government officials, district councillors can help locals organise small-scale demonstrations if they want to make proposals.

"These movements will definitely have an impact on the government's decisions," Mr Sin said. 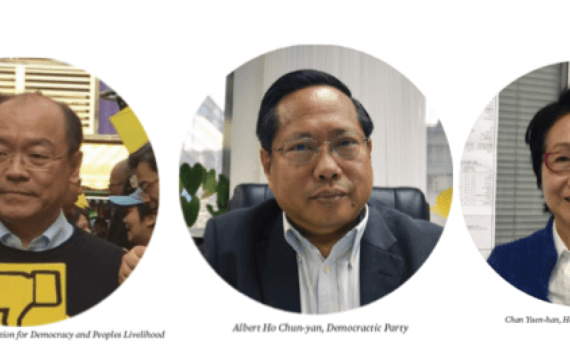