Besides enjoying fireworks at Victoria Harbour on chilly New Year's Eve, there is one more interesting thing to do as we conclude the year 2013: Checking end-of-year lists. We want to know who are among the richest people in the world or in our country, although we do not earn as much as they do. We also want to know what the best products of the year are, no matter whether we will buy them or not. Journalism students including me are always instructed to read the Time's Persons of the Year, or the Economist's Countries of the Year, no matter we agree on the publications' choices or not.

I would like to draw your attention to word-of-the-year lists in different places, no matter you are a linguist or not. As usual, this column targets Chinese only. As my Chinglish translation fails to make sense at times, I shall not be liable for your tuition fee of learning my mother language.

In mainland China, there are two well-known lists. One is compiled by a Shanghai-based literature monthly Yaowen Jiaozi (literally means Chewing Essays and Crunching Characters), and the other is jointly worked out by the Commercial Press, Beijing Language and Culture University as well as National Linguistics Resources Monitoring and Researching Centre, a body affiliated to the country's education ministry. "China dream" topped all the popular phrases selected by Yaowen Jiaozi this year, whereas in the latter list, "positive energy" is the 2013 buzz word and "house" is the character of the year.

Hold on. I am not showing you small-circle selections of propaganda clichés only. Well, on the surface, party terminologies seem to be the politically safest ― in Chinese euphemism "the most harmonious" ― options that will not embarrass the country's ruling elite, especially when the new leadership just ascended to power one year ago. I do not mean that such rankings of words are politically determined, given my limited knowledge of their internal selection process. But if I were a senior central government official in charge of all forms of publications, which by the way is impossible, I would not be as flattered as hundreds of millions of Chinese netizens to see things like "smog", "carcass" or "corruption" dominate the repertoire.

In fact, much more fun resides in runner-up lists. After all, Beijing does not have enough party-exclusive phrases that can fill up all these spaces. Both rankings included popular words around China's cyber space such as "nyuhanzi", or muscular women who behave as candid and upfront as their male counterpart. Heated Weibo discussions on this topic were unprecedented, challenging mainlanders' traditional perception of women to be soft, amorous and tender. Another example is the much-famed "tuhao", a thousand-year-old word that quickly went so viral this year that it was even rumoured to be enlisted in an upcoming edition of Oxford Dictionary. The expression, better understood as nouveau riche, connotes both people's discontent and subtle envy to those with abundant wealth.

If you do not know the following newly-born Chinese idioms, hybrids of four keywords extracted from a long sentence, you are unlikely to be regarded as Weibo-savvy. It is sad to hear "shidongranju" (though deeply touched, a girl rejects a boy anyway), because she "leijuebuai" (tired and sore, one cannot love anymore). This illustrates "renjianbuchai" (life is hard and the truth hurts), and makes us feel "xisikongji" (think it through, and it will scare you to death). We can always resort to the excuse of "bumingjueli" (one does not get it, but thinks it sounds terrific), but if we understand it, we would "xidapuben" (delightfully telling everyone the good news).

Once you have overcome the resistance to those aforesaid exotic expressions, you will find a feature they share except bizarreness, or at least I hope so. They are overwhelmingly ironic or even sarcastic about the status quo, spreading the "negative energy" that needs to be alleviated. Popularity of these words is not related to political matters, but the impact these words have on China's politics is no less than "China dream". With their work toughening, inflation rising, environment deteriorating and relationship alienating, many young Chinese can find happiness nowhere but make fun of themselves on the Internet. Although the joy of seeing fellow netizens' creativity might temporarily overweight their grievances, these grievances will become "xisikongji" once young adults are in desperation.

In other places, end-of-year words might be worrisome as well. Taiwan selected "fake" in 2013. Singapore picked "haze". Malaysia preferred "rise". In South Korea, Yonhap news agency reported in December that 204 out of 622 professors surveyed chose an idiom meaning reactionary and perverse. The idiom is widely interpreted to be against the rule of the country's first female president Ms Park Geun-hye. Probably the only good news is from Japan, where people chose "ring", as the third largest economy had won the bid to hold the 2020 Olympics.

What about Hong Kong? I learned that the DAB was holding a similar event. But will it be "representative?" Imagine that we can elect the word through "universal suffrage", will the outcome be "occupy", "love China love Hong Kong" or even the name of IKEA's adorable toy wolf "Lufsig" that reminds people of Cantonese profanity? Would it be more interesting than "selfie" that is favoured by Oxford Dictionary? Let us wait and see. 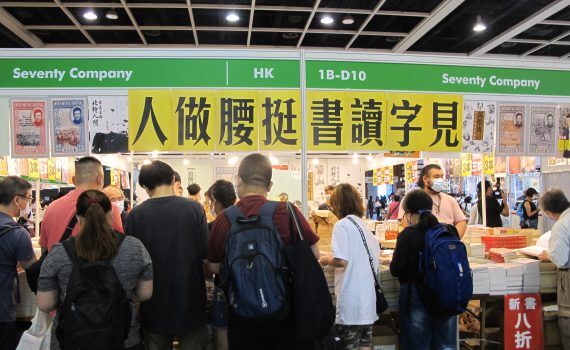