Editorial cartoons can be controversial. Cartoons depicting the Islamic prophet Muhammad published in the Danish newspaper Jyllands-Posten in 2005 provoked international protest against the caricature, which was allegedly offensive to Muslims. The protests resulted in deaths and violence, and people were jailed for plotting to kill the cartoonists and attacks on the newspaper which published the cartoons. Mr Steve Sack's work has not been as provocative, but is influential in its own way.

An editorial cartoonist since 1981, he works for the Star Tribune, a newspaper in Minneapolis. He won a Pulitzer Prize in 2013 for his "vivid, distinctive cartoons that used creative metaphors for high-impact results," according to the Pulitzer Board.

His drawings cover diverse topics from American politics to international news such as the Umbrella Movement in Hong Kong.

"Cartoons are cute," he said. "So they can be doing horrible things, even with harsh comment towards the issue."

Mr Sack made his debut as an editorial cartoonist when he was in university. He illustrated features and drew cartoons for the Minnesota Daily, the newspaper of the University of Minnesota. He had enrolled to study economics, but realized it wasn't his poassion and quit.

He describes his cartoons as "a reaction to the news" and attributes his inspirations to fellow journalists, who are his sources of information, "I cannot do my job if other journalists did not do theirs well." 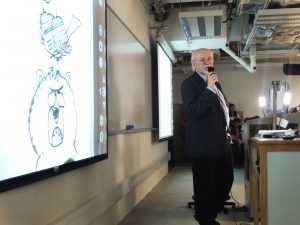 He usually makes a few sketches about his thoughts after reading the news, a daily habit of his, and send the sketches for his editor to choose from. "It's like doing a homework — that I have the little space to fill in every day."

"Cartoon is around the world in any circumstances," he said, believing that cartoon is about everything in life. He also regards cartoons as a visual form of writing that practically functions as poems – conveying a message with metaphors and similes.

He pointed out that editorial cartoonists in America were "something of a dying rim", mainly because some newspapers cut down production cost by axing cartoon columns, making it difficult for cartoonists to survive.

There were over 300 in the trade when he first started as an editorial cartoonist, but the number has gone down to about 60 in recent years, he said.

But he believes that editorial cartoon has its values and is an inseparable part of the news industry. The shrinking sector has not shaken his belief. "We have to have cartoons, like we need to have letters to the editor and opinion columns," he said.

He co-produces Doodles, a children's cartoon feature, with Mr Craig MacIntosh, who used to be an editorial cartoonist. The comic strip published on Creator Syndicate features Professor Doodles and his menagerie of animal characters.

Unlike Mr Sack's work at the paper, his zoo characters are purely for fun and lead children through activities such as games, riddles, drawing tips and jokes. In his leisure, Mr Sack also enjoys doing fine art like painting and making sculptures.

"There is no better way to express myself other than cartoons," he said. 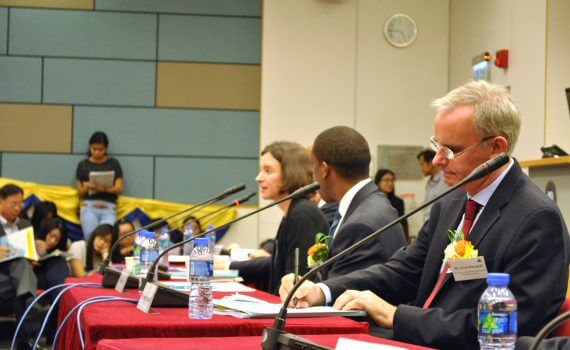