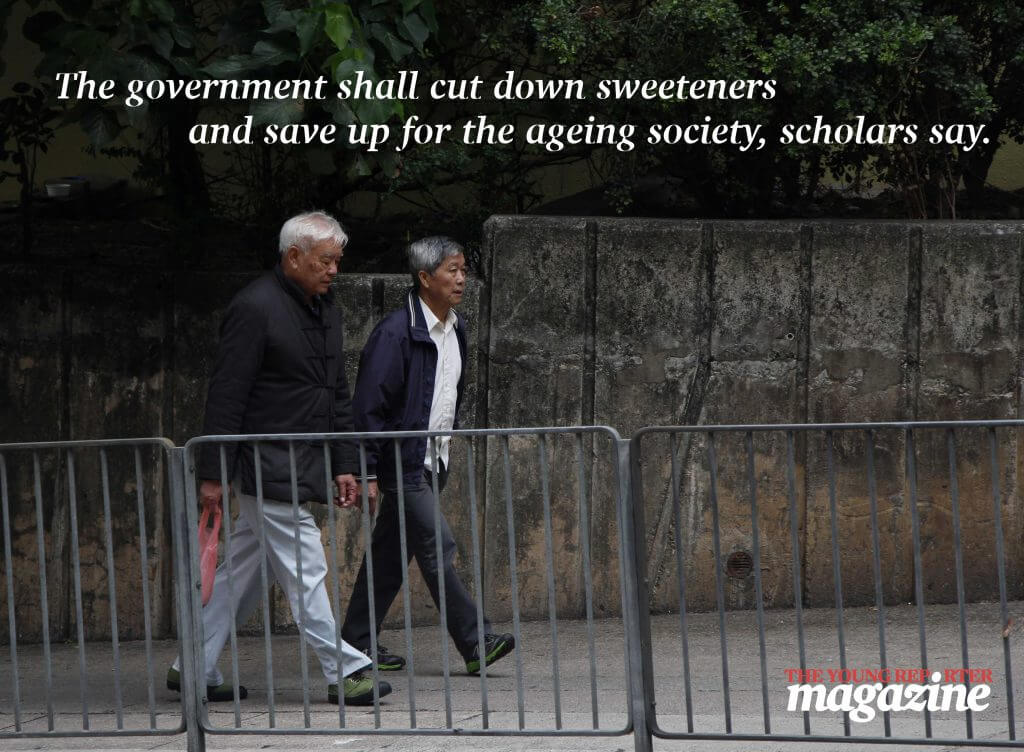 Financial Secretary Mr John Tsang Chun-wah announced sweeteners totalling $34 billion and rolling out a Future Fund with an initial of $220billion in the budget 2015.

An academic said the one-off relief measures have comprehensively covered the need of different classes.

"The Secretary has an easier job to do when there is a colossal budget surplus," Professor Terence Chong Tai-leung, executive director of the Institute of Global Economics and Finance of the Chinese University of Hong Kong, said, "Giving out sweeteners shall impress the citizens."

While a salaries tax rebate and an increased child allowance ease the burden of many Hongkongers, Prof Chong said Mr Tsang's proposal left out the multiple have-nots.

"People living in the cubicle flats cannot benefit from the reduction in rates and salaries tax, not even the waiver of the rent of public housings."

Prof Chong suggested the government not to continue handing sweeteners every year as it will generate an expectation from (or among?) the people.

Dr Chung Kim-wah, the assistant professor in the Department of Applied Social Sciences of The Hong Kong Polytechnic University, agrees on the cut-down of sweeteners.

He told TYR last Friday that such measures were like launching "fireworks" and showed the government's "short-sightedness".

He added that as the Secretary had once disclosed the notion of gradually removing these one-off relief measures as a policy goal, the proposal of increasing the "sweetness" this year was "self-contradictory".

He said the small amount of money would not help the small businesses much, while the corporate owners could get a huge benefit.

Dr Chung pointed out that the government was "seemingly rewarding those whom supported the government during the Occupy movement", even with an unintentional cause.

Rather than spending money on one-off measures, both Prof Chong and Dr Chung agree that the government should put it into a continuing fund that tackles deep-rooted problems.
Ageing population is one of the pressing issue.

According to Financial Services and the Treasury Bureau, the Government has spent $22.2billion on healthcare and elderly services, including Old Age Living allowance, public transport fare concession, health care voucher.

By 2041, elderly people will make up 30% of the total population and related welfare policies will cost $57billion.

Prof. Chong explained that the Future Fund should serve as a long term saving scheme that brings higher returns through long-term investment.

While some suggested that the Future Fund should be used to cover the enormous cost of building infrastructure, Prof Chong disagreed.

He thinks that "there are various ways to pay the bill" but the objective of the Future Fund should be resolving the cost of an ageing society and predicting a structural deficit.

Dr Chung shares the same point and view and adds'As no boundaries are set, it is easy that the money is put into different uses, and ends up violating the objective of the fund.' He urges the government to put money into a long-term care system and specify the fund's usage.