The consumer watchdog is warning buyers of eyelash extensions to think twice about the possible risks before trying the increasingly popular beauty enhancements.

The Consumer Council says the eyelash extension services offered by some beauty salons are not professional and are largely unregulated.

The council says it received 10 complaints last year of unsatisfactory quality, including some customers who suffered eye infections.

It cites the case of one woman who experienced pain and blurry vision after four weeks of treatment. An examination revealed that a piece of adhesive had entered her eye and inflamed it.

And Dr Marcus M. Marcet, clinical assistant professor at the University of Hong Kong's Department of Ophthalmology, warns that "adhesives used in these products can cause an allergic reaction, which can damage the eyelid skin.Also, bacteria can potentially grow in the fake lashes, leading to infections."

Eyelash-extension services have grown in popularity because they help users achieve the look of longer, natural lashes, while reducing the time spent on daily makeup routines.

"I can be lazy at times, when I don't want to put on any makeup. With eyelash extensions, I can look pretty without any makeup," says Ms Chloe Shen, a regular user of extensions.

It takes between an hour to two hours for a specialist to adhere false lashes one-by-one to a customer's natural lashes using adhesive.

Zoe Wong, area manager of Blanc Beauté Ltd, says the extensions usually last around three to four weeks, depending on care and an individual's lash-growth cycle.

Dr Jhanji says "customers should check the ingredients, especially the adhesives used for the extensions, before receiving the service."

But the Consumer Council says only a few salons clearly specify the major ingredients in the adhesives used.

One of the reasons, says Noel Chan, the marketing director of Suavis Lash Bar, is that "at the moment, there is no formal paperwork in Hong Kong to make sure the glues (used by different salons) are up to standard."

She says their salons "have different glues for people with different levels of sensitivity. The glues can have some ingredients removed to avoid the allergenic effect, but then the durability might decrease."

"There is not enough control in the market, which is why we can see that there are some salons using not-so-quality products that might cause damage to the customers."

Dr Marcet warns that anyone with a pre-existing inflammation of the eyelid, such as blepharitis, should not have eyelash extensions applied. Blepharitis is a common eye condition characterized by chronic inflammation, usually along the eyelashes. He says eyelash regrowth can also be a concern in cases of prolonged use.

People who have undergone eye surgery or have an ongoing eye infection are also not suitable for extensions, says Dr Catherine Chan, a specialist in ophthalmology at the Hong Kong Professional Eye Surgery and Laser Center.

The false lashes themselves can be an issue, said Dr Pauline Po Chun-chan, a specialist in ophthalmology.

"Increased weight on the eyelash, and infection, can damage the lash's follicle, causing regrowth of thinner lashes or loss of lashes."

"Some salons only look at the effect of the treatment and (they) use a really long and thick lash, but then your real lash cannot afford it because it is too heavy."

Dr Marcet says that customers should ascertain that the premises are clean and that the provider is a trained professional. And he says referrals by family members or friends who have had a good experience are useful.

An alternative to having false eyelashes is to apply bimatoprost, a registered drug in Hong Kong. It was developed for treating glaucoma. One of its side effects is promoting lash growth, which has led to its use in cosmetics. Anyone considering this treatment should seek medical advice and inform themselves of the possible risks. 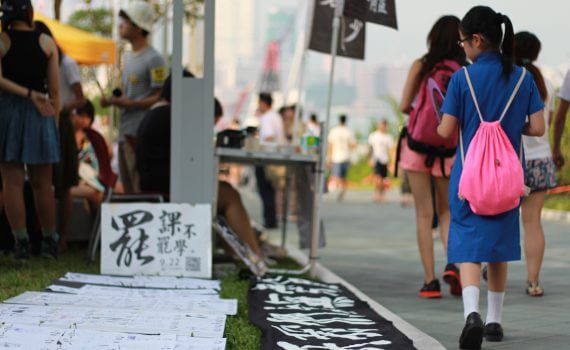