Games with immersive experience are merely one dimension of AR world. In the blueprint of AR business people, classroom, retail market and advertisement will all become battlefields of AR in the future.

The word Augmented Reality swept the city in 2016 with the viral game Pokémons Go. Although the game seems to be dropped by most of the people after the hit, Hong Kong entrepreneurs do not stop their attempts to go on exploiting the potential of AR industry in a diverse way.

Serving education, retail, and advertising fields is the intensified direction of worldwide AR business. Figures speak out for the prospect of the market - a report of Goldman Sachs last year estimates that the value of global VR/AR application in retail and education field could reach about $12.4 billion and $5.4 billion respectively by 2025.

A few Hong Kong startups woke up and smelled this opportunity these years but the whole industry is still in a primary stage. Though the technique itself sounds like a path to hyper-reality, local AR developers' role

is more similar to contractors than scientists, who buy technology over- sea then offer made-to-order services to different targets.

"When you scan a plan using AR, some three-dimensional kinds of stuff or videos will pop up – this is what AR could do now technically. However, the point is not what it could do but how to apply it wisely, creating fresh things", said Roy Lo, Business Director of Creote Studio.

Roy and his wife Coby made a name for themselves for the innovation injecting AR into their wedding in- vitations and wedding album, which won them the HSBC Youth Business Award last year and triggered off the entrepreneurship.

Now their business is trying to prove that AR marketing solution could be more vivid and serves more purposes. For instance, adding specific floor plans, tourism guide and reservation service to a three-dimensional model of a hotel.

"Despite the fact that AR effect is still limited, the technology is actually of a high potential in extended functions, which could enhance the customer experience a lot. "

The AR-based showcases unfold fea- tures of products before it finished in reality and simplify the work of sales- person with only a booklet and an Ipad, Roy added.

Developing a specialized AR applica- tion for promoting a particular brand costs up to about $300,000, while small and medium-sized enterprises could choose the lite AR platform service, which merely charges about some thousand dollars.

Another prospect lies in the education field. Coco Kang, the Business Development Executive of Darseek Innovation, said that customization services take the predominant share of profit, of which mainly lay in the education sector and professional training.

International schools and educational organization are introducing the new method of study these years. Furthermore, the cooperating partner including industrial giants like Chinapower, who paid for the augmented training for electrical workers, she said.

She believed the reason why corporations are devoted to AR industrial activities is that the immersed, interactive platform makes decision-making more unforgettable and it decreases the overall payout in training expense.

A research done by University of Hel- sinki three months ago said the tech- nique advances learning effectively in science education context, especially for pupils, while whether AR works for adult instruction is still not clear so far.

The sectors AR getting involved are hard to count since AR has an advantage in expanding information and concretizing ideas, which is needed almost in all professions, Roy concluded.

Facing the heated global trend of researching augmented technology, where Apple, Microsoft joined the battle one after another, the Hong Kong AR development seems to be left behind.

Charles Mok, Legislative Councillor of IT Functional constituency said that the AR industry in Hong Kong is still in a "relatively early stage" and "the biggest issue is most of the business are only developing soft- ware while the equipment is not good enough".

He said some of the local AR applications are quite interesting, whereas the extension of large scale needs supports of advanced equipment. An- other knotty fact is that local corporations are not proactive to invest in the long-term industry like AR.

"The government does not put any particular efforts in promoting and adopting VR/AR in the past years," said Charles. "the government for repeating the agenda like "supporting the university research" but did not take the leadership to apply the technology."

"They failed to meet the local demands. If the government can adopt AR in large scale for various possible applications for training or engineering works, it will probably be a boost to the local industry." Current policies nurturing high-technology industry focus too much on the supply side but deviated from the demand side, he stressed. 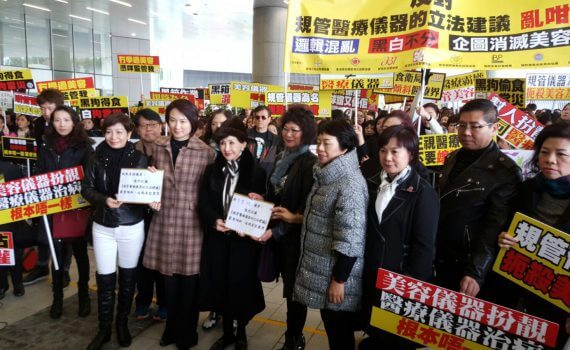