The frilly, dark lace trimmings embroidered around Tsang Ching’s knee-length, eccentric red dress stood in stark contrast to the modernity of the bustling streets of Mong Kok. With immaculate makeup and long, soft curls fanned over her shoulders, Tsang Ching strutted past the sardine-packed markets in a pair of black suede knee-high boots.

Biologically male, Ms. Tsang identifies and dresses as female. She first started crossdressing began when she tried on her first pair of stockings at the age of six. During secondary school, she would crossdress at home borrowing clothing from her family members, only to put them back when she felt satisfied. But as she did not have the money to buy shoes and wigs until she turned 23.

Now, Ms. Tsang, 33, works as an organising secretary for a labour non-profit organisation and dresses as a woman every day. Her colleagues are largely accepting of her identity, she says, and adds that the major objection comes from her wife.

"Some think crossdressers are gay, and that’s the reason why they do crossdressing. Or they would straight up think that I am a pervert because I was dressing so femininely", said Ms. Tsang, "I want to be treated as a female even though I don’t hate being male."

With increased LGBT exposure in recent years, whether or not Hong Kong has progressed into a safe place for men to publicly crossdress remains a question.

"Each time crossdressing is used in Hong Kong and Chinese media, it is sometimes laughable. It is used as comedy." said Brenda Rodriguez Alegre, a transgender lecturer of Gender Studies at the Faculty of Arts of the University of Hong Kong.

"I think socially, logically and psychologically, safe is a complex term to use. Maybe you will be safe in the sense that you can do it, and you will not be killed for it."

The general public tend to view crossdressers from a medical point of view – treating them as transvestites or perverts attaining sexual pleasure by dressing up as female, said Day Wong, an an Associate Professor of gender and sexuality studies at the Department of Sociology of the Hong Kong Baptist University.

"Crossdressers can be still exploring whether they belong into the category of another gender or they are uncomfortable with the gender assigned at birth. Through crossdressing, they express their gender recognition. This is one kind of transgender, or transsexual," said Professor Wong.

For a male crossdresser, whether he is safe in the public depends greatly on how he passes as a female – with bone structures and physical characteristics being the most important deciding factors, according to Prof. Wong. Yet, if they are exposed, the resulting consequences are often verbal and physical abuse.

The most common form of abuse transgender people have experienced is physical, and verbal abuse – accounting for 62.9% and 58.1% respectively from 135 survey respondents, according to a study on Violence against Transgender people in Hong Kong conducted by the Transgender Resource Centre in 2018. Half of the victims also reported on domestic violence, including 27.4% from their sexual partners.

"I am aware that physical assault sometimes happen to crossdressers. But personally, I have not experienced it. I have been verbally assaulted a lot, mostly online as people leave mean comments labelling me as a pervert or questioning the reasons as to why I would want to be a woman when I am a man," said Ms. Tsang.

Also born biologically male but identifies as female, Kit, who does not wish to give her full name because she is afraid of societal backlash, is a 42-year-old laundry shop employee started dressing femininely since the age of 20. Although she doesn’t agree that Hong Kong is a safe place for crossdressers, she believes she is relatively lucky compared to other crossdressers because of her feminine appearance and voice.

"I think a lot of the obstacles came from myself, because I do have male characteristics like facial hair, so sometimes when I put on makeup, I feel that something is missing," she said.

"Some people may be able to tell that I am not female. Although they will look at me with a questioning look, the problem goes away once I start talking to them."

Prof. Wong added that the public needs to be better informed about the gender recognition and identities of crossdressers.

"For crossdressers, some wear clothing traditionally worn by the opposite sex  as a means of expressing gender identity, but some do not, such as those who crossdress to attain sexual pleasure in their private space. I think this does not really need law protection, but requires public education," Prof. Wong said.

"We have to break down the social stigma beginning with education, then we have to have laws of anti-discrimination." added Dr. Alegre.

Ms.Tsang has been accepting more media interviews as part of her plan to engage in the public LGBT publication and to raise awareness of her community. Ultimately, she wants change and balance.

"I don't need acceptance from the society," she said, "I just don't want the resentment directed towards our community."

"Although the general public and society are generally not accepting of the crossdressing community, I hope crossdressers can also try to take others' feelings into consideration while staying true to themselves," added Ms. Kit. 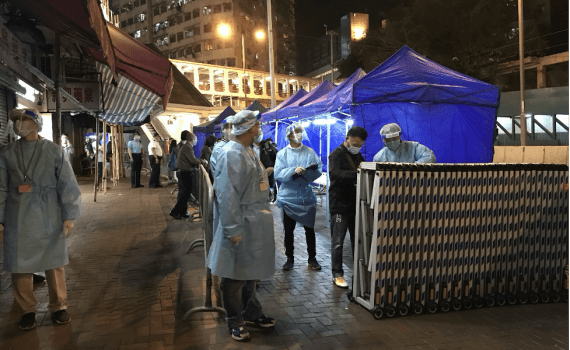