Heavy police presence, stringent checks and limited public transport has made it harder for protesters to stage a sit-in protest at the Hong Kong International Airport. Initiated online by netizens, dubbed as "Airport Traffic Stress Testing", they called for the public to go to the airport to create disrupt traffic and airport operations.

Dozens of riot police were stationed at every entrance and exit of the transport hub and demanded people wandering at the airport to leave. Passengers needed to provide valid air tickets and travel documents for checking at the entrance of the departure halls before entering the terminal buildings.

Some thought the police's behaviour was inappropriate.

A Belgian tourist who only wishes to be known as Hazma, was in the bus on the way to the airport when police conducted bag searches checkpoints at the toll plaza. He added that the police asked for his passport.

"It's a little intimidating, I am not used to this situation (riot police patrolling everywhere at the airport)," he said.

Students known as Mr. Ha and Ms. Wong, aged 21 and 23 respectively, were spotted at the bus terminus holding up their mobile screens showing slogans that said "Fight for freedom, Stand with Hong Kong" and "5 Demands Not One Less".

Both criticised the act of clearing people out as “over the line”.

"People are just voicing out their opinions. The police are stamping out Hong Kong citizens' freedom to do so. I highly doubt that they know what they are doing," said Ha.

A 59-year-old woman, who gave her surname as Chin, was arrested this afternoon. She claimed she was sitting by at the bus terminus finding her way home when a female police officer suddenly ordered her to leave.

"I was just here to dine out," said Chin, having no clue why she was being accused to be violating the restriction order. She was later brought to a police vehicle, with the location of her whereabouts yet to be known.

Some are disappointed with the outcome of this protest.

"There are much fewer people than last week. We used roadblocks back then to stop the cars, but today there is not even a traffic jam," said Ms. Law, a 22-year-old fresh university graduate. She believed that the fear of needing to walk for hours to leave the airport was what’s stopping more people to join today's protest.

"I believe that demonstrating at the airport is useful as it directly affects the city’s economy, such as the seafood supply by air. This imposes pressure onto the government, urging them to respond to our demands," she added.

Due to the demonstrations, the MTR suspended the Airport Express service in advance at the request of the Hong Kong government and the Airport Authority. Bus services were limited as well.

It is the second movement at the same venue this week. After heavy disruptions caused by black-clad protesters on September 1, the airport implemented strict access control today.

The airport's bailiffs and police started to evacuate citizens outside the airport later in the afternoon, warning that people who wander at the airport were violating the injunction order. The Airport Authority Hong Kong (AA) has obtained a High Court order in mid-August after several sit-in protests have been staged at the departure and arrival halls, causing flight cancellations and inconvenience to tourists. 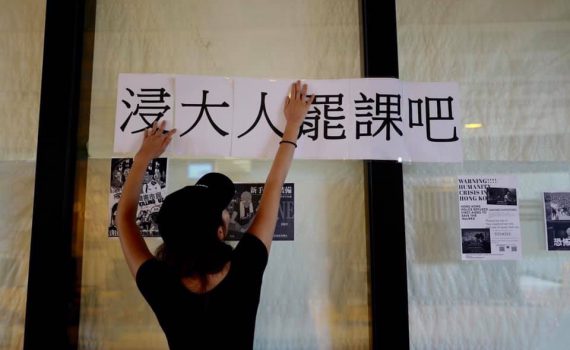