About 10 people lined up at a convenience store outside Tai Wai MTR station this morning, ready to claim their government consumption e-vouchers through their Octopus cards.

Eligible people have been receiving the first batch of HK$2000 e-vouchers since yesterday. The second batch of $2000 will be issued in October followed by $1000 in December. Consumers must spend what they have received in order to get the next two rounds of handout.

The e-vouchers can be paid through Alipay Hong Kong, Octopus, Tap & Go and WeChat Pay HK. The payments can be activated online or by tapping the Octopus card at a payment counter.

Miss Wong was in the queue in Tai Wai this morning. She planned to use the vouchers to buy a television set.

"I don’t mind waiting in line given the discount," she said, "and there are convenience stores everywhere in Hong Kong. So if you really don’t want to line up and wait, you can get the vouchers later."

Thomas Tong was shopping for an air conditioner at Fortress in the Festival Walk mall.

"I planned to buy an air conditioner, but the vouchers helped me make up my mind sooner," said Mr. Tong.

A sales person at an electrical appliance shop told The Young Reporter that the consumption vouchers have really helped business.

Many customers have been visiting his store since the vouchers were issued yesterday and he has seen at least a 40% increase in sales.

Some restaurants that accept e-vouchers display a poster outside to attract customers.

Simon Wong, Chairman of Hong Kong Japanese Food and Cuisine Association told The Young Reporter that the e-vouchers have brought a10% increase in business since yesterday.

But the manager at Six Up Inn in Kowloon Tong has not seen a significant increase in clientele.

"More than half of the customers used the vouchers yesterday, and most of them used Octopus cards," the manager said. 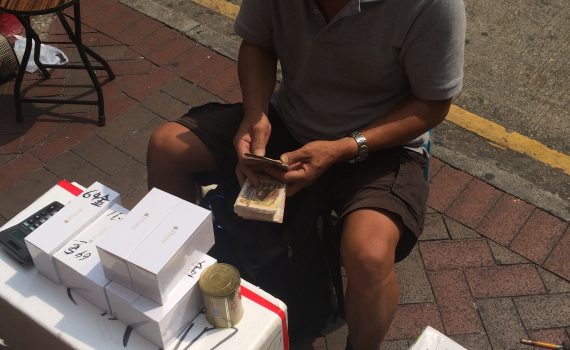